Get more traffic - Celebrate others

There’s a lot I don’t agree with on the internet. I’ve got opinions coming out of my ears.

There’s this comment I saw on Hacker News that I vehemently want to rebut. There’s this company that pissed me off recently online. There’s a few people that were pretty rude on a bus ride in Chicago last month.

I could write some flaming pile of words about how someone has done something terribly wrong on the internet, and I could share an opinion where we could all get really enraged as we go to work.

But then I looked at my website analytics recently and saw this: 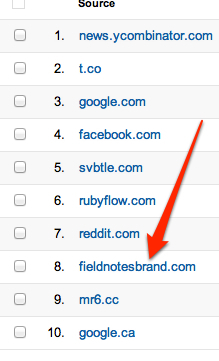 This reminds me of something very important that I think goes missed by a lot of folks trying to get more traffic to their blog or project.

There’s all sorts of negative stuff I have an urge to write.

But seeing the above screenshot reminds me of something I’m super proud of. I often try and write about someone whose habits or teachings have altered the course of my life.

These aren’t reviews. I’m not reviewing someone’s latest product. I’m not regurgitating what I could easily leave in some bullshit Amazon review.

These people don’t know me. Some of them have blown me off before when trying to reach out.

What I’m doing is trying to point out to people reading this tiny blog, that there are some insanely inspirational projects or bodies of work that you might not have heard about.

There’s Aaron Draplin and his obsession with old notebooks. There’s Mailchimp and the quirky things they do to add personality to their products. There’s Dr. Cialdini and his life’s work on persuasion and how it helped my wife get a new job. And then there’s Joe Sugarman who was the marketing genius behind Blue Blockers and wrote a book called Triggers that helped me figure out a technique for saving some money on getting a sandwich at lunch.

Not for the purpose of getting anything in return. After all I’ve written about some of these folks before, and most often I don’t hear anything back. But that’s never something I’m looking to get. I merely admire people doing creative things that aren’t typical water cooler conversation and think you might dig them too.

But sometimes, you do get something back.

Joe Sugarman sent me a nice thank you over Twitter. Coudal retweeted my blog post and if you look at the Field Notes website you’ll find a link to Ninjas and Robots in the sidebar. :)

And the best one of all was after Dr. Cialdini retweeted the link to my blog post, I got an email from his staff saying:

Dr. Cialdini liked the blog post so much he would like permission to possibly use it in his next book as an example.

It was just a feeler, and the odds of it appearing are low I’m sure. But the point is, this practice of teaching others around me all this cool shit I’m seeing and learning has unexpected rewards.

As you write your next post. Or create your next page of something on the internet. Give a real hard think about the habit you’re getting into with your writing or marketing. I know you have an opinion. And you are here to correct the wrongs of so many things that have gone before you.

But you might be surprised at how much staying positive and writing about others does for you.

Design Inspiration from Svbtle - The trouble with being efficient

Being good developers and designers, we typically define reusable features like a navigation bar or a footer and include them in multiple pages of our design. In PHP we might use “includes”. In a web application framework like Ruby on... Continue →