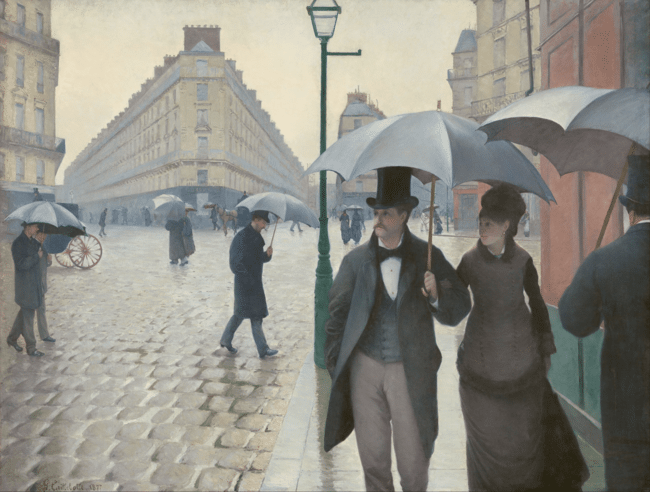 A decade or so ago, a young musician couldn’t get anyone to play his music. He had some raw talent, and just recorded his first album, but all the gatekeepers thought he just sounded too young. Without Disney or Nickelodeon marketing his stuff, he was a dud.

What does he do?

What about Gustave Caillebotte?

Caillebotte was an interesting impressionist. I don’t think anyone would say he’s bad, but he sure isn’t as popular as Monet.

Caillebotte also has a quirky story. Upon his death he requested his art collection be hung in the Musée du Luxembourg in Paris. His art collection was about 70 paintings he had collected from his friends, also impressionists.

They weren’t popular. They were actually the worst paintings of his friends. “Worst” being the ones his friends couldn’t get anyone else to buy. And at the time, people didn’t even like impressionism. Many hated it.

So Caillebotte’s request in his will for the government to take his friends paintings and hang them in a museum was insane. How can someone force a museum to hang a bunch of paintings that no one liked or is even familiar with just because it’s a dead person’s request? It resulted in fierce criticism from the art world and public scrutiny.

But Renoir finally convinced the museum to hang half of the collection 3 years after Caillebotte’s death. When the collection opened to the public, the museum was packed. Everyone wanted to see these paintings because they had generated so much scandal.

The 7 friends in Caillebotte’s collection.

Sure Caillebotte had an eye for talent, and a belief impressionism would be admired at some point in the future.

But what really happened is that the inadvertent exposure that Caillebotte brought to his friends also made people like them more.

At least that’s the argument Derek Thompson makes in his book Hit Makers. Derek mentions James Cutting, a professor of psychology at Cornell University, and Cutting’s work to show how exposure begets likability.

In Cutting’s experiments he had people compare famous paintings to more obscure works. Cutting proved the obvious - people prefered paintings from painters who are famous 6 out of 10 times.

We don’t judge things just based on quality. Exposure changes our mind. The more we see, hear, or read something, the more we like it.

That young musician had promise. But he needed to break through somehow. His manager came up with a plan. They were going to get in a van and travel around the country visiting every radio station he could. The kid is charming and has some talent, so it wasn’t as hard to schedule single visits to play an acoustic track from his record live on air.

And this kid performed that track a lot. Eventually the exposure of playing the same song over and over again propelled “One Time” to the top of the charts and this musician is now a household name. This musician’s manager said:

There’s not a DJ that can say they haven’t met Justin Bieber.

There’s a lot to unpack from Justin’s rise to the sensation he is today. Not the least of which was the grit of a 14 year old kid who wouldn’t take no for an answer. Or the unwavering optimism he had of putting himself out there on YouTube uploading crappy videos of himself performing.

But one of the most interesting aspects of Justin’s story is that to get through his obstacle, he went out and generated exposure to his work even if it wasn’t the exposure that he originally intended. He thought he could cut a record and get a ton of people listening to it. Instead he had to take the little wins and build from there.

Most of us aren’t going to be the next Justin Beiber, but it’s still a lesson for us to go figure out how to get more exposure even if it isn’t the big splash we imagine we’re capable of.

Want to be a headline speaker, go do talks at all the tiny chambers of commerce in front of 8 people for awhile. Want to get a byline in a famous publication, do hundreds of guest blog posts for whoever will pick you up.

It’s a big reason I’ve generated the audience I have. I’m out there doing podcasts, daily vlog episodes, interviews, and writing articles in a ton of different places.

I remind myself how often someone like a Justin Bieber played to just a handful of people at first or played the same single song over and over again without losing faith or enthusiasm. Or how Monet, no matter how talented he was, still needed the exposure, even if accidentally, a friend generated. Because in this day and age, even people with good products, talented musicians or painters, we all need to be out there generating as much exposure as possible to break through the noise.

Without great solitude no serious work is possible. Picasso This essay is part of a collaborative blogging project to answer the question: ‘How do you invest in yourself?’ I invest in myself in all the usual ways. I try to work out a lot... Continue →