This last summer was my daughter Addison’s first dance recital.

That’s a big deal for a 5 year old and her parents! Tons of practice, both sets of grandparents coming, and one giant crowd of people to perform in front of.

The performance was awesome. But afterwards, I had the responsibility of picking her up from the “green room”.

The green room was just a small gym located near the entrance of where the recital took place. Everyone would drop their kid off, then proceed to walk down a long hallway to enter the auditorium and find their seat. After the performance, the parents were asked to send just one parent to go back down that long hallway from which we came, to pick up our kid.

Now, I don’t know if it was most of us not paying attention to the “single parent” rule, or everyone just having way too much fun chatting in the hallway, but getting back to the green room to pick up a probably exhausted, hungry, impatient kid was a nightmare. Nobody could move. 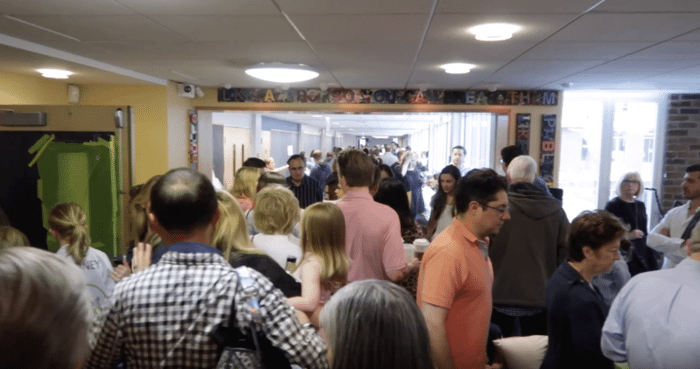 This was turning out to be an awful end to what I was hoping would be pleasant start to her dance career. But I’ll get back to that.

Earlier that week, Addison naturally had a dance rehearsal for this recital.

This didn’t go to plan either.

The first thing we bumped into is that we didn’t have “nude” tights. I’m still not entirely sure what “nude” tights are, except they probably need to look a lot closer to your skin color than Addison’s were. We had white tights.

Things got even worse when we arrived at the recital and I realized we don’t have a purple, sequined bow that, again, every other single girl has in their hair. Has it been irrecoverably lost? Probably.

I’m nervous. I’m afraid a parent or a teacher is going to have a talk with me that I need to purchase new tights or I need to find this bow before she can even participate. I’m also dreading the reaction Addison is going to have when someone asks her about these items and starts making a fuss over them. And that’s exactly what happened. Another little girl came over and started enquiring about the missing bow. Here comes a blow up.

But that’s not what happened.

Instead, Addison just calmly replied, “I don’t care. I don’t even wanna wear the bow.”

My daughter felt she had more important things to worry about like dancing well and dealing with the nerves of performing in front of a lot of people. She didn’t want the extra drama about the right colored tights or missing hair bow.

Her ability to ignore what other people thought to focus on things that were truly important to her, was just the grounding I needed.

Back to the recital. I found myself in that hallway staring at this crowd of people. But it dawned on me that we’re in a school. Schools have hallways, stairwells, multiple entrances and exits that all lead to the same places. No one’s telling me where I can and can’t go in the school. There’s no off limit hallways. Why am I following this pack of people when I could easily go around.

So that’s just what I did. I turned around. Took the hallway no one else was using to go completely around the auditorium and the crowd. I was worried for a second that someone was going to say something to me, “what are you doing in here.” But I just thought about Addison from the rehearsal the day before. She wouldn’t care if somebody said something. She’d just calmly adjust.

I made a big circle around the back of the auditorium, ended up right at the entrance of the green room where I left her, and we made our quick exit.

This morning I woke up to an article about teens vaping and the challenges it poses, especially considering the folks dying from vaping products. Multiple teens are quoted with simply: “doing what everyone else is doing.”

It’s not just teens, it’s all of us. We evolved to be a very social species, who use cues from the crowd to help find things that are interesting like food, or avoid uninteresting things like hungry lions. But it doesn’t always serve us correctly.

My daughter isn’t immune to it either. Starting kindergarten I already hear her mention wanting to dress like everyone else is dressing. So it’s moments of clarity like this recital that I choose to highlight here and refer back to when I’m doing my own decision making.

Is the decision in front of me truly from the universe of possibilities, or am I simply just taking the path everyone else is on?

And surprisingly often, I find there’s another hallway.

A friend of mine had an idea for an iPad app to help kids with autism. It seemed like a pretty good idea, but he was in a place many others find themselves in. He didn’t have any money. He didn’t have any resources. And he sure as hell... Continue →