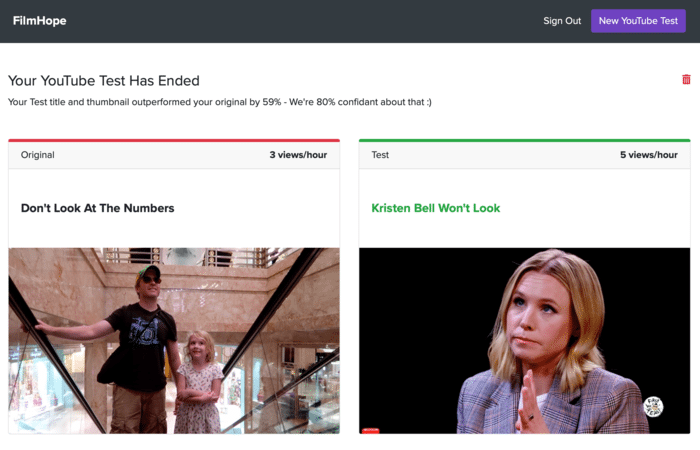 It’s been over a year in the making, but today my family would like to announce our latest adventure: FilmHope.

Are you the type of person who doesn’t measure anything? Do you buy your clothes without sizing them up? If someone asks says something costs $5, do you just give them whatever wad of cash you have? Do you show up to everything whenever you darn-well-feel-like-it?

Of course not. So why do so few people measure and optimize the performance of their YouTube videos? Because it’s been so difficult.

Toady, my family is announcing the launch of FilmHope. FilmHope is the super easy way to test different titles and thumbnails for the YouTube videos you upload. Just upload like you normally do, go on over to FilmHope.com, pick your recent video, and choose a new thumbnail and/or title. 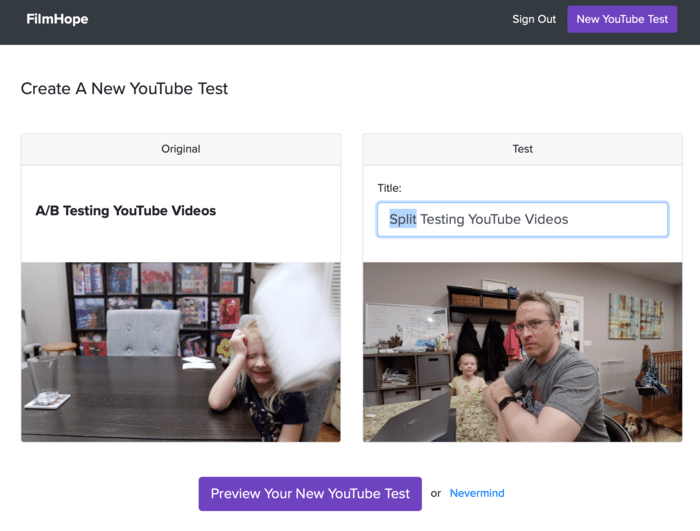 Within 24 hours, we’ll email you with a statistically significant result of which title and thumbnail did better. (Or let you know if we couldn’t measure anything in time. We can’t test if there’s almost no traffic to your videos.)

It’s super easy to use and play with. First couple of tests are Free. If it’s handy, sign up for a subscription to help keep the tool running.

Give it a try! Have any questions? Please reach out. Would love to hear from you.

Here’s a video my family put together to explain the launch: 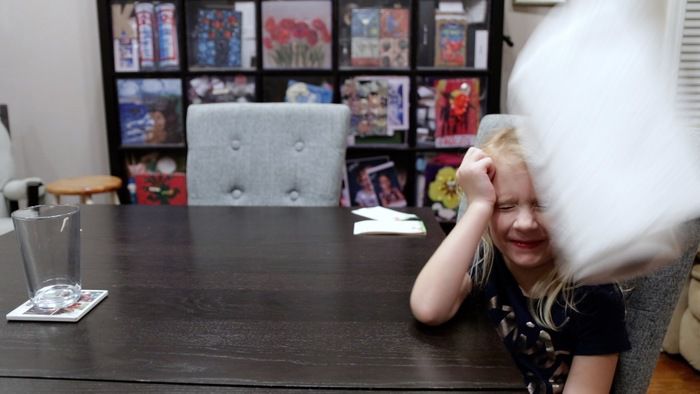 How are we different than other split testing tools out there? Well, YouTube is a different animal that can’t be tested like a normal website. If you want to get an early blessing of traffic from YouTube, you need to get a great Impressions-to-Clicks ratio as soon as possible. So, it’s important for a split testing tool that wants fast results to test while recognizing that traffic to a video isn’t constant over time.

Doesn’t YouTube have a way to split test already? No. They’ve hinted that they’re testing something in a small pilot. But YouTube Studio has been in Beta testing for years. I suspect a split-test tool from YouTube will take awhile to come to all of us. If it does though, we’ve got some great ideas we can add to it.

Your family is launching this? Yep! My wife and I started working on this over a year ago, actually. It sat on a shelf, though, unfortunately because I broke my number one startup rule: get the smallest thing that could possibly work launched and iterate from there. Instead, I went down rabbit hole after rabbit hole and never launched the smallest thing I already found useful. So I took it off the shelf, put the launch polish on it and now my daughter helped me make a launch video for it.

How I find ideas in trivial details. The guy who stares at screws.

Some folks have been interested in where I find blog ideas and ideas in general. If some of this type of thing interests you, keep your eyes open for future posts. Today I just want to share a tiny little bit about where I get ideas... Continue →